The world federation also estimates that there were more than 116 million direct sellers in the world. 65 million of these were in Asia/Pacific, 33 million in Americas, and 15 million in Europe. 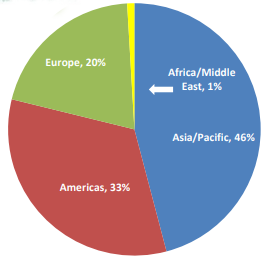 Out of the five regions the WFDSA divides the world into, Africa & Middle East which is the smallest in volume, came up with the highest growth rate: 9.9%.

The graph on the right shows these regions’ shares in the global volume at the end of 2017. This breakdown has not changed from 2016. 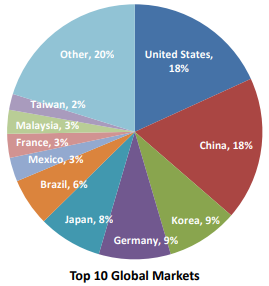 The world’s top 10 direct sales markets are shown on the graph. The only difference from previous year’s Top 10 list was that in 2017, Taiwan replaced the UK to enter the list.

Of this top 10, six had $10 b+ annual sales volume: US, China, Korea, Germany, Japan and Brazil. These six markets generated roughly 70% of the global sales.

The two markets that reported the worst performances were Netherlands (-14%) and Belgium (-10%).

Wellness category kept its top place last year. Its share was 34%, almost the same what it was in 2016. 32% was cosmetics and personal care’s share in the global direct sales in 2017.This was more than two points up from 2016.

The total share of the largest two product categories was 66%. In other words, about 2/3 of what is being sold through this channel is either cosmetics, personal care or nutritional products. These two categories were the strongest in “Asia/Pacific” where they accounted for 73% of the sales volume.

The third largest category in the world was household goods and durables with 11% share.

This article has aimed at providing a general insight on how the industry performed last year, globally. For more detailed data, you might want to check WFDSA web site.

Note:
WFDSA states in its report that some country figures represent the whole direct sales market, some others represent only the volumes of local DSA members, and some are basically WFDSA estimates. Nevertheless, these reports always give us pretty significant indications.