Individual direct sellers’ earnings have always created a controversy. Some people strongly argue that it is not possible to make even a part-time income in direct sales, let alone a yearly six-figure income. On the other end of the spectrum, there are others who claim it is so easy to get rich.

Truth obviously lies somewhere, but where exactly? To shed light on this whole issue and help educate the novice, I think we should just take a look at the real picture. Below are some facts from eight of the major direct selling companies’ income disclosures for 2020: 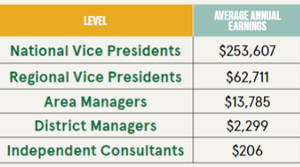 A typical Arbonne participant at the “Independent Consultant” rank in the United States averaged $206 in 2020 in earnings and commissions. This group was 56% of Arbonne’s total sales force.

0.4% of the sales force were at National Marketing Director level and earned $44,988 on the average. Company’s highest level of achivement is “Presidential Marketing

Scenty divides its Consultants into two groups in its earnings disclosure: Group 1 consists of Consultants who were with the company for all 12 months of 2020 and Group 2 with less than 12 months.

1) It is actually possible to achieve really high income through direct selling.