Following the second quarter reports from public direct sellers, the time has come now to take a look at various companies’ cost structures and profits.

In this article, 11 direct selling companies with varying sizes of business and with different product portfolios will be covered: Avon, Herbalife, Mannatech, Natura, Nature’s Sunshine Products, NHT Global, Nu Skin, Oriflame, Tupperware, USANA and Youngevity. The review will be based on their 2016 half-year (Q1+Q2) performances. 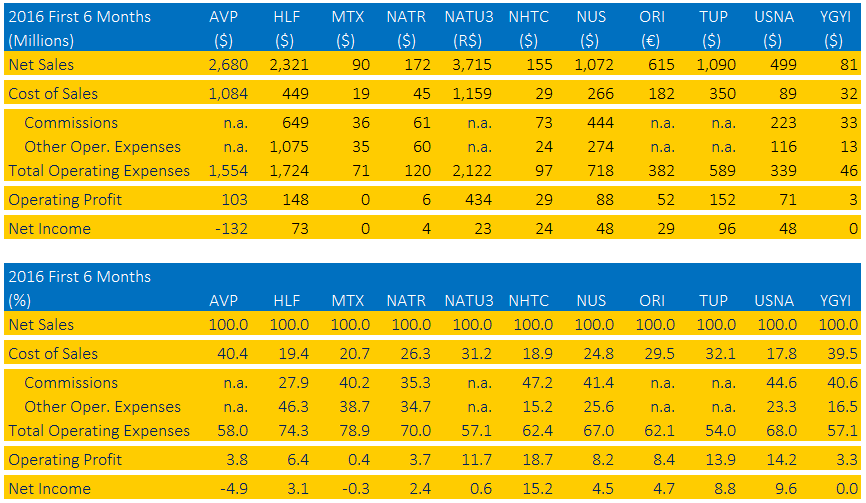 This figure consists of all direct costs attributable to manufacturing the goods at a company. It includes costs of materials bought and used in the production process and also the direct labor costs.

Among the 11 companies analyzed, Avon and Youngevity (both, roughly 40%) are the ones that have the highest product costs relative to their revenues. Herbalife, NHT Global and USANA stand on the other end with the lowest product costs (around 18-19%. The difference is really striking!

Not all companies disclose their commissions payout as a separate expense item. Such companies’ figures are shown as “n.a.” on the chart. Among those we have the commissions data for, NHT Global has the highest bonus payments as a percentage of its sales: 47.2%. The second highest is USANA (44.6%).

When the total operating expenses are compared, Mannatech has the most costly operation (79%). Herbalife follows Mannatech with 74%, and then comes Nature’s Sunshine Products (70%).

All 11 companies reported operational profits in the first six months. The three highest operationally profitable companies were, NHT Global (19%), USANA (14%) and Natura (12%). Mannatech’s operational income on the other hand, was almost nil.