Few weeks ago we saw how the industry giants ended 2016 from a growth perspective. This time we will review their and also several others’ year-end cost structures and profits. 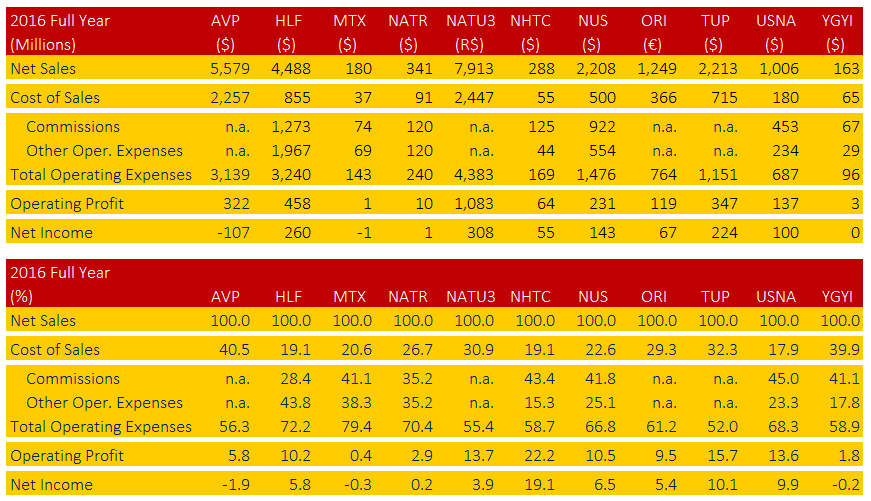 Cost of sales (or “cost of goods sold”) consists of all direct costs attributable to manufacturing the goods at a company. It includes all costs of materials bought and used in production and also the costs of direct labor utilized in producing the goods.

Within the 11 companies analyzed, Avon and Youngevity have the highest product costs (both, roughly 40%) relative to their revenues. Herbalife, NHT Global and USANA are on the other end with the lowest product costs (around 18-19%).

On our chart, this is divided into two sub-categories as a) commissions paid to the field members, and b) all other operational expenses. As you see, some companies’ commissions are presented as “n.a.” This means they did not disclose their such expenses as a separate item.

Among the seven companies that disclose commissions data, USANA has the highest bonus payments as a percentage of its sales: 45%. The second highest is NHT Global (43%).

When the total operating expenses are compared, Mannatech stands out by having the the most costly operation (almost 80%). Herbalife follows Mannatech with 72%, and Nature’s Sunshine Products with 70%.

Some high, some low but all 11 companies on the chart reported operational profits in at the end of 2016. The two highest operationally profitable companies were NHT Global (22%) and Tupperware (16%). Mannatech’s operational income on the other hand, was roughly at break-even.

Hakki Ozmorali is the Principal of WDS Consultancy, a consulting firm specialized in providing services to direct selling firms. He is also the publisher of The World of Direct Selling, global industry’s leading weekly online publication. He is an experienced professional with a strong background in direct sales. Hakki was the first corporate professional in the Turkish network marketing industry. His work experiences in direct selling include Country Manager roles at Oriflame, Herbalife and LR Health & Beauty Systems, and Regional Director, North America role at Lifestyles Global Networks.


Forward This Article to a Friend: