This article is a review of the first-half 2018 performances of seven major public direct selling companies from a revenue growth perspective. You will see there were both impressive and unsatisfactory performances in the second quarter.

Out of the four regions of Avon, only EMEA reported sales growth in the first quarter (+1%). North Latin America was at par with last year, Asia & Pacific was down 1%, and South Latin America down 8%. Avon saw active representative losses in all of its four regions, ending with 4% global decrease. Active representative declines in Brazil, Russia and Mexico were specifically noted.

Management commented that Brazil had impacted overall revenue performance this quarter significantly, in part due to the impact of the truckers’ strike that prevented orders, deliveries and delayed cash collection. Without this impact, Avon’s global revenue would have been -1%.

CEO Jan Zijderveld said, “Entering my seventh month at Avon, I am encouraged by improved revenue growth in three of our top five markets… However, we are not yet satisfied with the overall operating results of the quarter… We are prioritizing achieving profitable, sustainable top line growth by focusing on our representative experience and satisfaction through enhanced training for 500,000 representatives in the second half, as well as new sales incentives programs, better service and improved forecasting… And, finally, we are placing digital at the center of all actions to drive our future progress.” Mexico, Argentina and Philippines were those three top markets Zijderveld mentioned that had grown in Q1.

During the second quarter, Avon completed the early redemption of its 2019 bonds (worth $238 million) in an effort to to reduce its debt and strengthen its balance sheet. This move brought Avon’s gross debt down to $1.6 billion as of June 30.

Avon has also made significant changes in its top management

Satisified with the results, CEO Rich Goudis said, “Our top-line growth rate accelerated in the second quarter reflecting the strength of our business model to provide solutions to many of today’s global nutrition and wellness megatrends.”

In Q2, Herbalife continued to expand its product portfolio, launching a total of 35 products globally.

İn Brazil, Natura’s sales grew by 7% in Q2. This was achieved despite the disruptions from the truckers strike and the World Cup. The rest of Latin America’s performance was on the other hand, +21%. Management’s comment on the results from Mexico and Argentina were “robust”. The Body Shop’s quarterly sales was down 12%,

Quarterly sales in China was up 41%, Southeast Asia 31%, Americas/Pacific 25%, Hong Kong/Taiwan 21%, EMEA 15%, and South Korea 5%. The only business unit that reported a sales decline was Japan (-1%). Among these seven regions, China is Nu Skin’s largest region, generating 35% of Nu Skin’s global volume.

“Based on our strong first-half results, with double-digit growth in both the first and second quarters, we now see revenue growth of approximately 15 to 17% for the year,” commented, Ritch Wood, Chief Executive Officer.

The number of registered active field members in the quarter decreased by 1% to 2.8 million.

CEO Magnus Brännström commented, “Despite facing significant currency headwinds, we are pleased to report an improved operating margin for the quarter. However, the overall sales development during the second quarter was weak due to challenging market conditions in key markets such as Russia, Indonesia and Turkey.”

As the long terms, the aim was announced as achieving local currency sales growth of approximately 10% per annum.

Following a negative growth in the first quarter (-2%), Tupperware’s second quarter was also a disappointment: Net 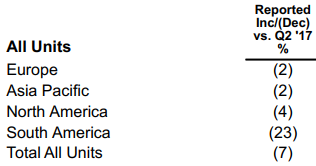 sales in Q2 was US$535 million, 7% down from last year’s same period (US$573 m). Maybe worse than this overall figure was that sales decrease was present in all regions.

Acknowledging the current not-so-good situation, the newly appointed CEO of Tupperware Tricia Stitzel is optimistic about the future: “We do acknowledge that we must perform better across the global portfolio. I am confident that with this dynamic team of experienced leaders and the 3 million entrepreneurs in our sales force, we will be able to innovate and execute to solidify our position as a thriving global brand.“

As a result, Tupperware’s share price went down to US$ 34 that is drastically lower than US$ 96 when it had peaked at the end of 2013.

For the second quarter of 2018, USANA’s net sales were US$301.5 million, compared with US$257.1 million in the prior-year period, an impressive 17.3% increase year-over-year. With this, its net sales for the first six months exceeded US$593 million. This is more than the figure USANA had achieved during the whole year only seven years ago in 2011 (US$582 million).

USANA’s regional revenue growth performances in Q2 were as 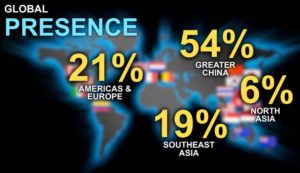 “Our operating results for the second quarter exceeded our expectations and reflect the momentum we are seeing in most of our regions. This momentum helped us generate the highest quarterly revenue and earnings per share in the Company’s history,” CEO Kevin Guest commented on the results.

Currently, USANA’s market value is approximately US$3 billion. Only a year ago in August 2017, USANA was valued at US$1.4 billion. To compare, today Avon’s market capitalization is less than US$1 billion and Tupperware’s is less than US$2 billion.

This analysis covers how seven of the largest direct selling companies have done so far in 2018. We will need to wait to see how they will perform in the rest of the year.