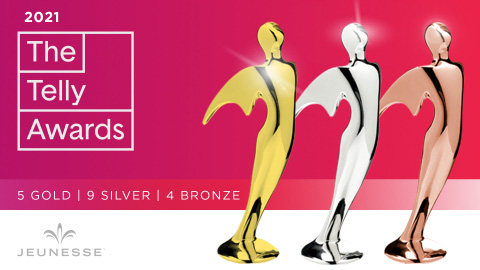 Jeunesse has received 5 Gold, 9 Silver, and 4 Bronze awards in the 42nd annual Telly Awards. Telly Awards is the world’s leading competition for video and television content.

Silver Telly Awards were granted to:

Bronze Telly Awards were received for:

“The Telly Awards is the premier competition for video work, and we are so honored to have received 5 Gold Telly Awards this year — a personal best for us,” said Jeunesse Chief Visionary Officer Scott Lewis.

Founded in 1979, the Telly Awards is judged by a group of leading video and television personalities from some of the most prestigious companies in entertainment, publishing, advertising, and emerging technologies.