Direct selling finds itself in a quandary when it comes to the gig economy. On the one hand, gig work keeps growing as a share of the economy, with major platforms like Lyft, Uber, and Doordash leading the charge. Many factors are responsible for this – shifts in technology and lifestyle preferences are predominant, as the pandemic has shown more workers the value of control over their time, productivity, and products and services.

On the other hand, direct selling has some road left to travel in order to become a cornerstone of gig work. The gig economy overall is huge – 60 million people and counting – while by the end of 2020, the latest time from which data has been finalized, the DSA estimates that there were 6.8 million part-time direct sellers and 0.9 million full-time and direct selling’s revenue increased by 13.9%. 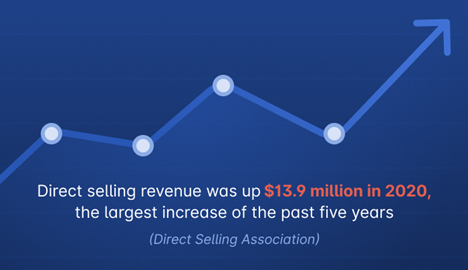 The math shows that direct selling makes up about 10% of gig work, far from direct selling’s ideal goal of achieving significant market share in this most critical component of today’s domestic and global job economy.

What does direct selling have to do to wedge itself firmly enough into the gig economy to be an essential part of it? Any one article can only graze the boundaries of an answer to this very large question – but we try to indicate a direction direct selling can go in the below – guided principally by the use of technology to simplify the distributor experience.

One reason why the largest gig platforms have been successful – platforms like ride-hailing apps, food ordering services, and even lodging marketplaces like Airbnb – is that they can be used rather easily. Everyone who doesn’t live under a rock will have placed a Seamless delivery or looked up an Airbnb for a weekend out of town.

Users can download these apps and often log into them with a Facebook or Google account alone – no long registration process required. Conversely, native apps also help users in listing a property on Airbnb or reaching their goals as a Lyft driver. Technology’s role isn’t static, either. A survey from Ultimate Gig found that 70% of gig workers use an online platform in contrast to an earlier survey, where that figure was 64%.

In other words, these platforms are not only providing useful services. They’re doing it in a manner that’s incredibly easy to use – even for the technologically challenged among us. This is part of what accounts for their success, as well as cutting out the “middleman” and thus saving resources.

Direct selling is different. Often, direct selling companies focus on products that improve people’s lives and that sometimes, even, are fun – makeup and beauty, home care, automotive goods. Whether through product demonstrations, social media posts, or face-to-face contact, direct selling is a fundamentally interactive form of gig work, grounded in human connection. This is one of its most important advantages. At a time when loneliness is epidemic, direct selling merges entrepreneurship and personal connection to an extent that other gig platforms and services do not. We might say that this is direct selling’s inherent advantage in the gig economy, its benefit to both sales reps and buyers which is more or less unique.

At the same time, direct selling companies generally lag behind the major gig platforms in terms of digital accessibility. Uber drivers can not only register in the Uber app, but they can also track their progress and their earnings, and learn ways to reach their rideshare goals – an all-in-one entrepreneurial experience.

At Rallyware – for context’s sake, we provide an end-to-end distributor experience platform for performance enablement – we have seen a number of prospects come to us with one common challenge: How do I get my reps over that onboarding hump? How do I get them trained and retained? Many distributors drop off. If you have a fun and engaging sales activity marred by complex processes, the latter will outweigh the former – especially when distributors can turn to another company for easy gig work via a simple, data-driven, modern-feeling app. It’s simple business logic.

Digital transformation for direct selling should not only mean an app for selling, but one that drives the full distributor development journey – amplifying performance, promoting engagement, and securing retention. Technology should use data and analytics to propel the learning and decision-making journey. 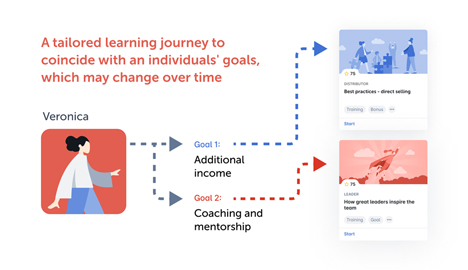 It should simplify direct selling, which can be overwhelming for new recruits, while helping reps build customer relationships with smart outreach and engagement tools.

Technology can also improve direct selling’s reputation and branding, which leads us to our next point.

Beyond Digital Transformation: The Question of Direct Selling Image

Direct selling companies who have embraced digital transformation have a second issue to contend with. Namely, large gig platforms have, by and large, a solid reputation. Whether consumers love them or hate them, they are extremely useful. It is past the point that anyone could even conceive of arguing about their viability or ethics; in one form or another, online gig platforms are here to stay.

Not so for direct selling’s reputation, which as everyone reading this piece probably already knows – or should know – has been buffeted by consumer complaints and new rules from the FTC. Poorly argued articles regularly question the moral and ethical components of direct selling. While Uber, Lyft, and others have spent the past seven or eight years establishing their foothold in the economy, some direct selling companies have mostly been playing catch up, content to stick their heads in the sand and wait for the bad press to go away.

Yet it was not so long ago that Uber was considered a foul player in the gig economy and in ride-hailing. But Uber worked on intertwining their business model with today’s urban economy, delivering their services in more locations to ensure that they were ever-present in the contemporary city. They trusted in the ease-of-use of their app and the value of their services, not letting criticisms bog them down.

Simultaneously, they worked to change their culture and improve their image. They made themselves seem to be less “ruthless mega-corporation” and more “modern all-in-one lifestyle app,” incorporating food delivery services, launching an IPO, and generally becoming ubiquitous. They did not address all the critiques and negativity swirling around their company, particularly criticisms of their business model in general; however, they did address the criticisms that have a serious emotional dimension, such as sexual assault and discrimination.

Though there is no one-to-one parallel here, direct selling companies can do much more in terms of updating and modernizing their image. Direct selling has deep historical roots in the United States, but the economy has changed over the past several decades. Digital transformation is the beginning of a much-needed image refresh.

While brand identity isn’t everything, it’s a sine qua non for companies who need to refurbish their public image. Some researchers even postulate that brand-image perception feeds directly into brand purchase behavior.

For direct selling companies, associating themselves with cutting-edge, data-driven, and easy-to-use digital tools shows consultants that this is a legitimate, friendly business who wants to help you make money in a fun way – and this app will help you do it, providing a unified experience for training, learning, and relationship building. Marketing by other means, it shows that you belong among the largest gig platforms of the day.

Additionally, direct selling companies can use technology to ensure that each rep goes through the proper compliance training according to regulatory requirements – that they digest and internalize relevant rules and regulations. This not only drives compliance, but tells reps: this business cares about following the law, no exceptions.

But the first step is first – polishing brand identity for direct selling. While of course there is more to be done than digital transformation, having a branded app that is cool, fun, and easy tells distributors: this is a good place to be. It eases their worries and allows them to settle into the world of direct selling and start onboarding.

Conclusion: A Cause for Optimism

After two-plus years of a global pandemic, workers want simplicity; they want to reduce distractions and access the entrepreneur within, without giving up all their time. Direct selling can provide exactly that.

The question is whether technology will be allowed to bridge the gap between gig workers who want a personalized entrepreneurial experience and the direct selling industry that can give it to them.

Thankfully, there are digital transformation platforms for direct selling which can help companies not only do that, but remain at the forefront of technology on a consistent basis – so that they never have to wonder, “Am I doing the most that I could be?” As a trusted partner to over 50 companies in 60+ countries, Rallyware is a ready-to-hand example of this expertise and innovative know-how.

For the direct selling industry, a larger slice of the gig economy is available for the taking. This is welcome news. The question is whether they will take it.

Poised at the cutting edge of digital transformation, Rallyware provides an all-in-one performance enablement platform for direct selling. Take your slice of the gig economy pie. Request a demonstration today, then check out our recent webinar on a centralized distributor experience.