Sports fans understand the thrill of seeing their favorite teams compete up close and in person. Even the biggest high-definition televisions fail to capture the sights, sounds and smells of a sold-out stadium filled with enthusiastic fans.

While the energy and excitement of live events is unmatched, today’s technology—led by social media—allows those who are unable to attend the opportunity to experience the excitement up close.

Here are four reasons why I believe an active social media presence at events is an absolute necessity for any company expecting to get the most out of its live events.

1. Generate Buzz: Does your event include exclusive announcements and world-class speakers? That’s the kind of information that’s begging to be shared on social media. Encourage your attendees to share it far and wide. And let others who aren’t there know exactly what they’re missing. Be sure to create a hashtag and promote it widely leading up to the event so everyone can follow along in real time (this also makes it easy for corporate folks to retweet distributor content).

2. Serve as the Official News Source: Cover your event like a news organization would cover, say, a sporting event. Plan ahead so you have sharable multimedia content to post and tweet the instant an announcement is made. If you just launched a new product, make it easy for your community to share the news immediately. We also broadcast daily on USstream to give viewers at home (or in their hotel or on their smartphone at the convention center) an inside look at the day’s significant happenings.

3. Connect with Followers: Our greatest social asset is our online community. Nurture your community and it will reward you by serving as your loyal brand advocates. To honor our most loyal social media supporters, we rewarded them with a special Social Media Ambassador button to wear during our international convention. It’s a small token of thanks, but the effect will be far-reaching. It also proved to be a conversation starter: “How do I get one?” was heard frequently, giving us another opportunity to encourage people to become more active on social media.

4. Encourage Future Attendance: You want non-attendees to feel like they are right there with you. But you also want to show that they’re really missing out on the overall experience by not being there in person. Share “attendee-only” specials from time to time that are visible to non-attendees following along on social media. We do this each year with our exclusive, limited-edition social media T-shirts. This year we even created a Facebook album recognizing a few of the so-called tweet-shirt recipients.

Social media is a tremendously powerful tool for direct sellers. Its power is amplified when you’re able to capture the excitement of live events and use it to maintain momentum the rest of the year. 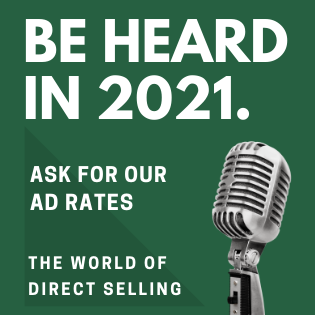