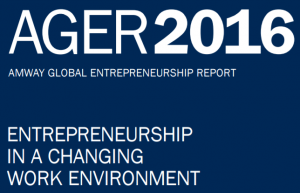 Amway has recently published its seventh annual Global Entrepreneurship Report (AGER), measuring “the public pulse of self-employment around the world” in its own words.

The first study was launched in 2010 as the “Amway European Entrepreneurship Report“ with 12,000 respondents, then expanded worldwide in 2013 as “AGER”, covering 24 countries. This last survey was conducted in 45 countries, with face-to-face and telephone interviews with 50,861 men and women aged 14-99. Fieldwork was completed by GfK Germany between April-June 2016.

Regional comparison is below (“red” showing the positive attitude, “blue” the potential):

These two are followed by “second income prospects” (37%),  “better compatibility of family, leisure time and career” (33%), and “return to job market, alternative to unemployment” (25%). “Independence” is the most appealing to the Canadians (85%) and the Americans (82%).

Respondents Think Self-Employment Will Be More Likely in the Future

Globally, 39% say people in their country will more likely be self-employed in full-time or part-time in the next five years. This expectation is found the highest in Colombia (73%), Brazil (61%), and Netherlands (61%).

Respondents Are Comfortable With Searching and Acquiring Customers

56% of the respondents feel comfortable when they would have to search for and acquire customers, whereas 37% do not. Vietnam (96%), Mexico (84%), and Malaysia (79%) are the top there countries where the most comfortable people are found.

The report once again features the Amway Entrepreneurial Spirit Index (AESI). Introduced in 2015, the AESI measures three dimensions that impact a person’s intention to start a business: desirability, feasibility and stability against social pressure. These dimensions have equal weights on the overall index.

Please click here if you wish to read the full report.