The Czech Republic is a landlocked country in Central Europe. Historically known as Bohemia, it is bordered by Austria to the south, Germany to the west, Poland to the northeast, and Slovakia to the southeast. 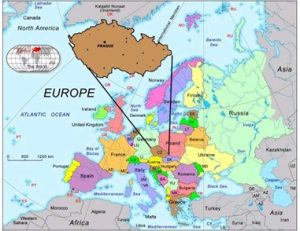 The Czech Republic has a hilly landscape that covers 78,871 square kilometers (30,452 sq miles) with a mostly temperate continental and oceanic climate. In terms of territory, the Czech Republic ranks the 21st in Europe and the 113th in the world.

The capital and the largest city is Prague. Other major cities and urban areas are Brno, Ostrava, Plzeň and Liberec.

Prague has a rich architectural heritage that reflects both the uncertain currents of the history in Bohemia and an urban life extending back more than 1,000 years. The historic center of Prague is a UNESCO World Heritage Site.

The Czech Republic gained independence on 1 January 1993 as the successor state of Czechoslovakia, before which it existed as one of the two republics of the Czechoslovak federation. It also builds on more than a thousand years of history of the Czech statehood and culture.

According to its constitution, the Czechia is a parliamentary democratic state governed by the rule of law with a liberal state regime and a political system based on the free competition of political parties and movements. The head of state is the President of the republic. The supreme and the only legislative body is the bicameral Parliament of the Czech Republic, at the peak of executive power is the government of the Czech Republic.

The Czech Republic is also a Schengen area member since 2007.

Visitors still tend to see the Czech Republic as 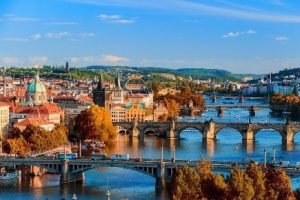 a part of “Eastern Europe”, although for more than a thousand years, Bohemia and Moravia have stood at the heart of European affairs – in both good and bad times. Over the centuries, Prague has served at various times as Europe´s leading city; while this territory has found itself reluctantly, in the middle of the continent’s most destructive wars.

The Czech Republic, along with nine other countries mainly from Central and Eastern Europe, joined the EU on 1 May 2004. It was the EU´s biggest-ever expansion.

The transport network in the Czech Republic is very developed. For historical reasons, this mainly concerns the railways and the 1st and 2nd class roads. The motorway network has been under construction since the 1960s and is still being completed. High-speed rail lines are also still in sight. The public administration in the Czech Republic, on the other hand, emphasizes urban and suburban public transportation. Public transportation in Prague is the only one in the country to use the metro system and it is rated as one of the best in Europe.

In connection with the war in Ukraine, 6 million people have fled Ukraine since February 2022. According to the Ministry of the Interior, the Czech Republic has so far issued approximately 342.300 temporary protection visas to people who fled Ukraine.

Presidency of the Council of the EU

The preparation and exercise of the presidency of the Czech Republic in the Council of the EU is managed and coordinated by the Prime Minister through the Section for European Affairs of the Office of the Government. The Czech Presidency 2022 is organized in close co-operation with all ministries, in particular the Ministry of Foreign Affairs and its Permanent Representation to the EU in Brussels, and other institutions at both national and European level.  The Czech Republic will form a trio together with France and Sweden, as it was in the first time.

Direct Selling in the Czech Republic

Despite various obstacles caused by COVID-19, direct sales in the Czech Republic did very well in 2020 and 2021.

The direct sellers are attracted mainly by the earning opportunties (26%), independence and work flexibility (27%) and the support from an established brand (31%). Sellers consider detailed product knowledge (42%) to be the biggest challenge, followed by communication with customers (26%) and only then, building a network of clients (24%).

Czech DSA member companies and their independent sales force adhere to ethics of conduct and business, and adhere to the Code of Ethics and to the applicable legislation. It is a very important for the Czech DSA to have set rules that are binding and will indicate a sign of seriousness and guarantee for customers / consumers.

An old-new trend in our industry is the possibility to work flexibly – according to direct sellers abilities and interests, while preserving personal life, using the digital environment, new applications, more and more attention is paid to sustainability and safe online socialization and training. Our customers are increasingly verifying information about the products and the companies whose products they buy.

The Czech DSA was founded in 1993 and is the main representative body of direct sales in the Czech Republic. It currently has nine member companies: Amway, Herbalife, Just, Nu Skin, Mary Kay, Oriflame, PartyLite, Vorwerk and Zaren.

We already see that direct sales is facing another difficult period due to the difficulties the war in Ukraine brings us. Our industry has been able to provide opportunities to tens of millions of people for more than 100 years, and it means a better life for them around the world, and it’s definitely worth moving on!

Written by Lenka Mrazova, General Secretary of the Czech & Slovak Republic DSAs. Lenka has been at the role since 2014. Her main tasks is to help create the conditions for associations to be perceived as recognized institutions for direct sales in the Czech and Slovak Republics, it is also important to provide support to member companies in promoting their legitimate interests and related tasks, she acts as a contact person for the media and is also a contact person for negotiations with major institutions.